Finally protesters in Egypt after a mass protest against president Mubarak. This issue has become a buzz issue in last few days and still continues to be an issue to be discussed all over the world. Let us read one article written in BBC Website today. BBC wrote:

The announcement, which was read by a senior officer on state TV, implicitly confirms that the country’s peace treaty with Israel will remain intact.

The military also vowed to oversee a peaceful transition to civilian rule.

The statement comes as thousands remain in Cairo’s central Tahrir Square, celebrating the resignation of President Hosni Mubarak on Friday.

“The Arab Republic of Egypt is committed to all regional and international obligations and treaties,” the military officer said.

The BBC’s Wyre Davis in Cairo says the statement should allay the concerns of the United States and Israel, where politicians are anxious that a change in leadership could jeopardise the 1979 Camp David accords.

The military also said it had asked the current government to stay on until a new one was formed, which would “pave the way for an elected civil authority to build a free democratic state”. 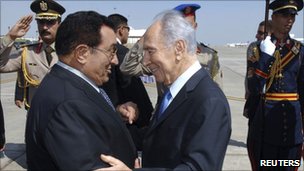 It gave no official timetable for the transition.

Mr Mubarak, whose resignation was announced by his Vice-President Omar Suleiman on Friday afternoon, handed power to the military’s high command, a body composed of high-ranking generals and headed by Defence Minister Mohamed Hussein Tantawi.

Shortly before the announcement, Mr Mubarak left Cairo for the Red Sea resort of Sharm el-Sheikh, where he has a residence.